Essentially what we do as a company is to help our clients to communicate more effectively with the people they need to talk to. This is often with journalists in our media training courses and crisis communications courses but it could also be communication with internal audiences, clients, suppliers, investors, regulators and others through our presentation and business writing courses.  This involves looking at the key barriers to effective communication. The types of barriers to effective communication vary from situation to situation but, in essence, they boil down to a few key challenges. They will also certainly be psychological, physical or social. They might also be connected with the way that someone comes across in their speech or body language. Whatever the problem we want to help the people that we work with to overcome it.

So, what are the barriers to effective communication?  Here are six examples – with advice for overcoming them.

1. The message hasn’t been defined and tested.

This is one of a number of process barriers in communication.  As part of our media training courses we spend helping our clients to define their messages, the hone them down and then to test them.  Most importantly we’ll look at whether the message is appropriate to the people that our clients need to talk to. As we say, “It’s all about the audience.”

The message might sound very reasonable and persuasive to the person transmitting it but the question is: will it land with the audience?  Is it relevant to them? Does it resonate with them? Overcoming social barriers to communication means that it must answer that fundamental question: “What’s in it for me?”  In other words, why do I care? This is very often because of systematic barriers to communication – no one in the organisation has taken charge of the message.

We encourage our clients to think about it from the audience’s point of view.  This might mean testing it on people who have no knowledge of the situation, who can come to it fresh.  We’ll also play devil’s advocate to test the message and, if it’s relevant, run it past our test of what makes a media story.

2. The language is a barrier to effective communication.

Do you have or know any teenage children?  If you do, you’ll probably find that they use words and phrases that mean almost nothing to you.  Why is this? After all they’re unlikely to be expressing concepts and ideas that aren’t covered by normal vocabulary.  At the risk of maligning them, most teenagers are only using this unfathomable language to say that something is cool or rubbish or that someone is good looking.  Language is about more than getting someone to understand what you’re saying – it’s about identity.

The corporate world is full of language that doesn’t work from the launch of the Vauxhall Nova in Spain (who’d buy car called a “Doesn’t go”?) to the meaningless, corporate bilge of certain senior executives.  John Cahill, global CEO of McCann Health, for instance, say that “Doubling down on our humanness will be the magic in how we drive better outcomes,” while Toyota has renamed the car a “sustainable mobility solution.”

How do you break through these social barriers to effective communication? Ideally you just keep the language simple.  This isn’t dumbing down. In fact, it’s quite the opposite as making complex concepts easy to understand is quite a challenge.  It’s about clear, lucid descriptions. The Economist, for instance, covers many serious and complex issues but, as we point out in our business writing courses, its house style is simple and elegant.

Just like your message, the language that you use to express it should also resonate with your audience.  If you visit a hospital, the doctor might use one set of words and phrases to discuss your treatment with their colleagues but they’ll talk to you in a different way, ideally one that you’ll understand.  We always say in our media training courses: “It’s good to use language that people understand but it’s better to use language they use.”

3. The curse of knowledge.

We’ve all been through it.  Someone explains something to us clearly and logistically, step by step – but starting at step five.  In other words, they assume that you know as much as about an issue as they do or, at least that you have greater background knowledge about it than you actually do.  Remember that professor at university who was brilliant but (or do I mean therefore?) couldn’t explain what he or she was talking about to the class?

One of the social barriers to effective communication, the curse of knowledge, is a cognitive bias first identified in 1989 in the Journal of Political Economy by three economists, Colin Camerer, George Loewenstein and Martin Weber.  A year later Elizabeth Newton, a researcher at Stanford University, conducted an experiment in which participants were divided into two groups: tappers and listeners with each tapper partnered with a listener.

The tappers then chose a well-known song such as “Happy Birthday” and tapped out its rhythm while the listeners had to guess what it was.  Before they started the tappers were asked to predict how often the listeners would be able to guess the song correctly.

They estimated that it would be about 50 per cent of the time.  However, of around 120 songs tapped, how many did the listeners guess correctly?  The wasn’t about 60. No, it was three. The problem was that the tappers could hear the tune in their minds – unlike the listeners.  So the tappers’ knowledge of the song caused them to wildly overestimate the chances of the listeners identifying the song correctly.

It’s essential again, as with most social barriers to effective communication, to put yourself in the shoes of the audience and think about in reality how much they’ll know about what you’re aiming to tell them about.

4. A lack of stories or examples.

Stories and examples perform two vital tasks in overcoming social barriers to communication.  They illustrate a point and they prove it. How many times in normal conversation do we use phrases such as “For instance…” Or “Just imagine…”

The use of stories and examples is pretty high up on the list of emotional barriers to communication.  Give someone some facts and two parts of the brain are activated – Broca’s area and Wernicke’s area. These deal with language processing.  However, tell someone a story and up to seven of the brains’ regions fire up. Depending on the content of that story these might include the primary visual cortex, the auditory cortex and the motor cortex among others. The more areas of the brain that are fired up the more engaging and memorable your message will be.  So, tell stories. Think story > point. 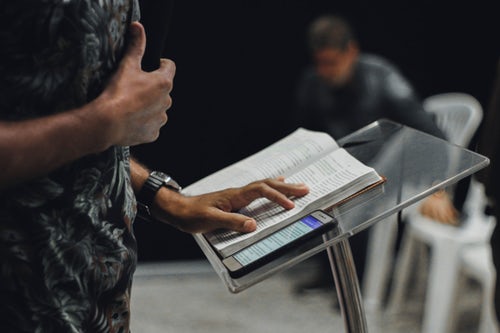 One of the social barriers to effective communication is a lack of empathy.  According to Aristotle, in order to communicate effectively with an audience, you need three things: ethos, pathos and logos.  Most business people and leaders of organisations tend to focus on the logos – the word, the logic. Of course, that’s important but if people don’t like you and relate to you (that’s the ethos) and if they’re not moved and inspired by your words (this emotion is Aristotle’s pathos) then your communication will fail.

This is particularly true we find, in our crisis communications training courses and here a lack of empathy can be included in the list of emotional barriers to communication.  You might express sympathy and understanding but if you do it in a robotic way or you use dull, corporate language you won’t connect with your audience.

If you want to reduce barriers to communication, then start by establishing empathy with audience. This might be as simple as using a phrase such as “I’m a parent too,” or “Personally, I find that…” or “I can understand why people say that.”  We recently worked with boss of a multimillion-pound recycling company and, as advised by us, he began his interview by saying that even he gets confused about the various recycling symbols and waste bin options.  Simply talking about “we” and “you” in interviews rather than “customers,” “passengers” or “patients,” also makes you sound more natural and empathetic.

You might have your audience in mind, you might have your message defined and tested, complete with examples and you’ve also checked the language that you’re going to use is appropriate.  That’s all great but if the medium that you choose to convey that message is wrong then you’ll come slap bang up against technological barriers to communication as well as physiological barriers to communication.

Choose the right medium might mean something as simple as not using PowerPoint.  People who attend our presentation training courses are often surprised when we suggest that try presenting without PowerPoint. However, a compelling story, well told, with a clear point and a strong call to action is often more effective than snazzy AV.

To overcome issues such as social barriers to communication you should consider whether your message is best transmitted by email, in person, via Twitter or even via a phone call.  The boss of Thomas Cook apologised for the death of two children on one of the company’s holidays by reading from an autocue. It sounded wooden and insincere. Personal injury claims provider, Accident Group, made its staff redundant by text.

Again, it’s essential to think about the message and the audience.  A bad news message, perhaps about redundancies might be better given in person.  If you’re talking about improving online security, on the other hand, there’s less of an emotional impact but there are more facts to get across.

Older people might prefer to speak on the phone or meet face to face while a younger audience will feel more comfortable with Twitter, WhatsApp or Instagram.

There are many barriers to effective communication but with careful thought and expert advice you can overcome them so that you can really engage with your audience and inspire them to think, feel and act in the way that you want them to.