Media coaching – do you have to answer a journalist’s question?

It’s always a big issue in media coaching – do you have to answer a journalist’s question?  As part of our media coaching sessions we’ll usually do a role play press interview with the participants.  As we tell them, we’ll do it in exactly the same way as we do during our day job as journalists, although we won’t publish it course. Instead, we’ll give detailed feedback on the story that we would have written well as the messages that came across and how they appeared to us as experienced, working journalists.

Very often we’ll ask a difficult or left field question towards the end of the interview since this is what could easily happen in real life.  We work closely with Comms teams and PR companies and they’ll brief us on difficult issues.  The interviewee will usually feel obliged to answer our query – or at least to have a go at it.  This is almost always where they lose control of the interview and end up giving us a great story.  Unfortunately, it’s very often not one that will suit them. 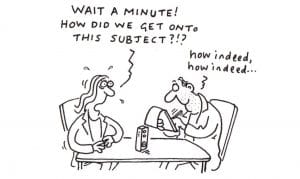 We did a media skills course recently with a large financial institution.  Towards the end of the role play press interview our media trainer/ journalist asked one of the course participants, a board director, about their views on Brexit.  Very helpfully and interestingly they suggested that Britain’s departure from the EU wouldn’t actually be a problem for the firm as it benefits from growing markets in the Far East.   This was a great story that would have made headlines in the Financial Times and other publications.  However, it wasn’t so good for the firm – and certainly not for the poor interviewee.

“But you asked me about Brexit,” they pointed out once we’d told them about the story that would have resulted from their interview.  “Yes,” said our media trainer/journalist, “but you didn’t have to answer it.” Lesson learnt.

The point is that we’d obviously expect the interviewee to answer a question about the agreed subject of the interview.  But there’s no obligation to comment on something that is outside this remit.  We often call this the “while I’ve got you here, minister” question.  This is because senior politicians appearing on Radio Four’s Today and other programmes will often be asked to talk about something that is current and – vaguely – relevant to them.   It might be an embarrassing comment made by a colleague, for instance, or something that the government is proposing.

Politicians are usually warned beforehand by their media teams about this risky, live issues and have lines to take ready.  With business people this is not always the case.  During an interview on Today to talk about new apprenticeships Sir James Dyson was asked about Brexit.  Instead of sticking to the topic the engineer and industrialist waxed lyrical on the subject. Within a matter of hours his comments were on The Times online.

But, of course, not answering a question goes against the grain for many of us.   We do a lot of media coach for lawyers, for instance.   They’re trained to answer a client’s questions accurately and comprehensively – and so they should.  We point out, though, that we’re not clients.  If anything, journalists don’t want a detailed answer to a question.  We just want the top line.

Similarly, we do media training for the luxury sector.  If you work for a luxury hotel saying “yes” to a guest and being helpful is in your blood so, of course, you’re going to try to answer a question as fully as possible. As we point out to the luxury hotel staff that we train, we’re not guests (and with journalists’ salaries as they are we probably never will be) so there’s no need to help us out by giving us an answer to what we’ve just asked them.

Doesn’t it sound shifty if I don’t answer the journalist’s question?

But doesn’t it sound shifty and evasive if I don’t answer a journalist’s question, people often ask during our media coaching courses.  The short answer is that it depends on the question and how you do it.

If you’re being asked a direct question about something that you’re responsible for and it’s part of the subject that we’ve agreed to speak about then yes, you must.  This example of Richard Madeley trying to get Defence Secretary Gavin Williamson to answer a simple, direct, yes-or-no question is quite toe curling.

If a journalist asks a finance director, for instance, why profits are down by 20 per cent this year then that FD had better be ready with an answer.  How he or she then moves the conversation on to something more useful is up to them. On the other hand, if he or she was asked about Brexit or about a competitor then no, there’s no need to answer the question.

What if I don’t want to answer a journalist’s question?

What, we’re often asked in our media coaching sessions, should you do then, if a journalist asks you a question that you don’t want to answer?  Simple: you tell them in a friendly but assertive way that you’re not going to do so.  Then, very importantly, you tell them why.  This could be because it’s outside your remit.  Just exampling that it’s a matter, for example, for the regulator or the government.  It might simply be an issue that you don’t want to get drawn on such as Brexit or a competitor, as we’ve mentioned above.  Again, just be honest and say so.

Most journalists will understand this.  Very often we’re not even expecting you to answer the question.  It’s just that our editor has told us to raise the issue or we assume that our audience will want us to mention it.  On the other hand, we’re also aware of the possibility of getting a new story – as happened with James Dyson.

Must I answer a journalist’s question during a crisis?

Surely, then, during a serious incident or a crisis, you’ll have to answer the journalist’s questions. Actually, not always.  As we explain in our media training courses, in a crisis you’ll be expected to provide factual information that you’re confident is correct.  But you’ll also be asked questions that neither you, nor probably anyone else knows the answer to.  In a crisis as the media scrambles to fill airtime and column inches speculation is often rife.

Get drawn into surmising what could have caused the incident or what might come out of it and, as we explain in our crisis media coaching workshops, you’ll lose control of your communication and create unwelcome headlines.   As we wrote recently mishandling a crisis really can cost you dear.

A good way to make a crisis worse is get drawn into responding to journalists’ questions when you should just stay mum.  So, here too, just be polite but firm and explain why you don’t want to answer certain questions.

We’ve had a lot of interest in a blog we wrote about five requests that you can ask of a journalist that you might not be aware of.   As we advise during our media training courses.  Take control of the interview and don’t be afraid to lay down terms to the journalist. This includes stating clearly the questions that you are and aren’t happy to answer.  So when people ask us during our media coaching courses whether you always have to answer a journalist’s questions – we explain no, not if you know what you’re doing.