Nicky Morgan is boycotting certain BBC TV studios because they’re not flattering The Times reports today.  It might sound vain and trivial but, as we regularly discover in our media training courses, this concern is not unusual.  Hardly anyone likes to see themselves on camera.

We’ve never done media interview coaching yet with anyone who said “Oh, my God, I’m gorgeous.”  One of the reasons why this is often such a shock – bright lights and high definition technology aside – is that the face you see on the TV screen is not the face that you see in the mirror each morning.  This is because no one’s face is entirely symmetrical and so this TV version, like a photograph, can sometimes be a shock. 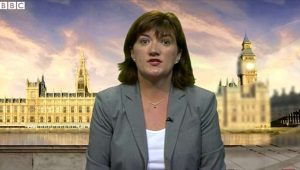 Nicky Morgan: not flattering and not fair?

According to The Times today Ms Morgan, a former cabinet minister and Remain campaigner, will now ask TV newsdesks to send a reporter and crew to her if they want an interview, rather than asking her to go into a studio.  Regional studios are a particular bugbear.

“I just get a whole load of social abuse afterwards about how ugly I am,” revealed Ms Morgan.  Shockingly, fellow MP Jess Philips told the paper that she received more than 600 rape threats in one night.

Nicky Morgan’s comments come as the City University of London publishes research showing that women are still less likely to appear as commentators on TV.  According to the findings, on the BBC News at Ten there were three male interviews to every one female, while for ITN News at Ten the ratio was 2.5 to 1 and for Sky it was 2.4 to 1.“a previously observed improvement in the proportion of expert women interviewed on news programmes has now stalled,” says the report.

Appearing on TV and radio certainly can be more daunting for women than for men.  With TV especially people still judge women more harshly.  This might be partly because women have a greater choice of clothes and are more likely to wear things such as jewellery which are purely there for aesthetic purposes.  Most men will either be featured in a shirt with or without a jacket and tie.  And that’s it.

We spend some time during our media training courses and especially during our crisis communication sessions to ensure that our participants are all wearing clothes that are appropriate to them enter the occasion.  It’s a simple fact of life that we tend to focus more on women in this area then we do with our male participants.  (Although we did have to advise one company spokesman that wearing a comedy tie was not appropriate when he was asking people to invest their money in his start-up.)

We’ve run media training courses especially for women.  Sometimes these are open courses where female participants come from a variety of organisations and sectors.  On other occasions we’ve put on media training courses for women from a particular organisation.  In even the most enlightened offices women sometimes feel more comfortable working with other women and having their performances reviewed by them then they do with their male colleagues.

As one woman told us afterwards: “I get on very well with the guys I work with and our office certainly isn’t a den of sexism. I just felt that I would be less nervous and more likely to develop during the course if I was just with women I didn’t feel the need to compete and compare myself with men.  A lot of people – including men – understood this when I told them about it afterwards.”

Our media training courses for women have approximately the same course content as those for mixed groups but the approach, the atmosphere and the tone ends up being slightly different.  Women are genuinely more likely to compliment each other’s performance and to feel more comfortable about expressing doubt and concern when they’re together in a group.

We’re always aware when we’re working with a group that there are psychological complexities to be taken into account.  Age, seniority, sex, race, sexual orientation and simply the number of people taking part are all important points to consider.  We bear them in mind when we’re designing our courses programme.

Working closely with the PR and Comms teams we’ll also advise our clients when to field a woman for an interview – especially if it’s a crisis of the situation is sensitive and when they should opt for a man.  Women might be seen as more sympathetic and they might challenge perceptions – you’d assume that a man did this particular job but actually it’s a woman.

On the other hand, people can be more critical of women.  As one of our media trainer/journalists who has worked on Newsnight, for instance, audiences are more accepting of male presenters taking an aggressive approach to interviewees.  However, when Kirsty Walk does it she’s often seen as hard and hectoring.  Organisations arranging for someone to be that interviewee and to appear on TV and, to a lesser extent, radio need to bear this in mind.

The most important thing – and this is one that we teach during the media training courses we provide – is that the spokesperson, be they male or female, is appropriate for the message and the audience and that they have sincerity and authenticity.  In other words, that they can come across as themselves.  That’s the basis of good communication whatever your gender.