Media training: five requests you can make of a journalist 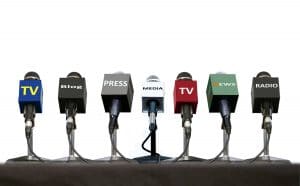 Being interviewed by a journalist can often be quite an intimidating experience. As many of the participants in our media training courses point out – even before we’ve had the chance to mention it – a slip of the tongue or an unfortunate comment can cost you your job.  Obviously, there are also distinct benefits to engaging with the media, otherwise no one would do it.  You can raise the profile of your organisation, sell a product or service, position yourself in the market place, sway public opinion, talk to regulators and opinion formers and flag up an issue that you believe needs to be addressed – the list goes on.

To a large extent media skills training is about risk management. If you know how the media works and what makes story and you know the little journalistic tricks as well as doing your preparation effectively then you’re in a good position to minimise your risk and increase the upside of engaging with a print or broadcast journalist.

How to take control of a media interview

Doing a media interview means that to some extent you’re playing in the media’s playground and therefore by their rules.  A journalist who rings you up to bark questions at you with a short deadline or a reporter who arrives at your office in a whirlwind, complete with camera operator and lights telling you what they need from you can be quite intimidating.

However, when you come to do an interview you have rights.  You’re the expert after all, and you’re being invited to contribute to a report, not banged up in the nick.  Here are five things that you can ask of a journalist that you might not necessarily be aware of.  We can’t guarantee that he or she will always oblige but it’s certainly worth asking.

Obviously, you should never do an interview without knowing what it’s about – although many people only ask this question after the interview.  But as well as checking on the subject matter (and the journalist plus the outlet and who else is contributing) you can also ask the reporter about their particular approach, in other words, the angle they’re taking.

For example, one of our media trainer/journalists has just done a report about companies donating to charities. That’s the subject.  The angle was that companies are being asked to support charities focussed on more obscure and niche causes.  Another of our media trainer/journalists recently did a piece about the Gold Coast and the Commonwealth Games.  Here the angle was about how the local government and other institutions are hoping to benefit from the Games.

Knowing the angle of the piece gives you a head start about the kind of questions that you’ll probably be asked and what the reporter will want to hear from you.  If you’re clever you can also work out how to weave in your own key messages.

Can I check my quotes with a journalist?

This is really for print interviews.  Note that it’s a request, not a demand.  “I was recently at a press conference when one of the speakers mentioned that they’d expect to check our quotes before we published anything,” says Simon Brooke, one of our media trainer/journalists.  “It was met by a derisive laugh.  In fact, half of us had already tweeted what he’d said.”

However, if you’ve done an interview with a print journalist you can always offer to look at your quotes as a service to help them to report you accurately.  A little modesty or self-deprecation helps here.  Explain that, “I’m conscious that I’ve thrown a lot of stuff at you,” or “I realise I talk quickly when I’m passionate about something,” or “I know some of this is quite detailed and technical.”  Emphasise too that you’d just like to check the facts and that you’re not going to try and insert any marketing blather or turn it into an advertisement for your organisation.

This only works for print and recorded broadcast interviews – obviously you can’t say it if you’re live on air.  But it’s still a key piece of advice for doing media interviews and it’s surprising how many people feel that they have to be able to know everything that the journalist asks them there and then. Your preparation should have covered the basics, including, of course, your key messages with examples to back them up, but there’s very likely to be something that the journalist throws at you that you hadn’t thought of.  It’s much better to promise to come back to them rather than trying to wing it. The journalist would also rather you did this.

More questions that you can ask a journalist

Again, you need to put this as a question to show that you’re being helpful rather than laying down the law.  Often the journalist will say “Actually, I’m not sure, yet.”  Even then, you can always use the opportunity to repeat and re-emphasise your key messages with a comment such as “I suppose from our point of view the most interesting point here is that…” or “Whenever I talk to people about this issue, they’re always most interested to know about…”   Just make sure that you then stick to your message and don’t add another point that might detract from what you’re trying to say.  As we remind people on our media training courses “message discipline” is essential in any media interview.

5. Can you move the camera, please?

This is really only appropriate if the TV reporter has come to your office or is meeting you in a public place.  If the sun is shining in your eyes or you’ve noticed something behind you that doesn’t fit in with your message or you’re simply uncomfortable with standing in the middle of a busy pavement then just ask if you can move.

“I once did a TV interview with a politician who was boasting about business confidence in the area but didn’t notice that we’d managed to position him to get a couple of ‘To Let’ signs in the background,” says Simon Brooke.

How gain control of a media interview

Be polite but firm and be ready to do a deal with them on where you stand or sit and how you do the interview.  Make it clear that you want to help them to get the best picture

Now, don’t try this one if you’re speaking to the nation live, obviously. However, if you’re doing a recorded interview for a package, in other words delivering a soundbite and you don’t feel that you’ve done your best you can always offer to go again.

The performance by the former boss of the British Dental Association is now part of media training folklore.  Quite whose advice he was following in this extract we’d love to know but normally the reporter will you let you do another take because they’re as keen as you are to get a neat, articulate 10 to 15-second clip.

We can’t guarantee that the journalist will play ball when you make these requests but it’s always worth asking.  We point out in our media training courses that if you do it in a friendly way and make it clear that you’re aware that this is a two-way street – they want some relevant, interesting content and you want the chance to promote your organisation and put your message across – they may well be willing to go with it.

After all, with media interviews as with anything else, you won’t get if you don’t ask.