Your spokespeople aren’t getting enough media coverage? Here’s why and how to fix it

Very often when we start one of our media training courses the PR professionals and Comms people that we work with mention that as well as handling difficult issues, on the proactive side, they’ve been struggling to create positive coverage.  This might include their efforts to “piggyback” off a running media story.   When a report comes out or a major company releases financial results that are higher or lower than expected or that are considered to be a bell weather for a particular sector the media will be often looking for comment beyond their own journalists.  Experts who can put the issue into context, give some background and, quite frankly, tell us why we should care, will be in great demand. 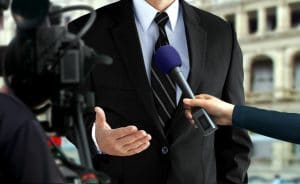 Getting media coverage for your spokespeople

Getting air time for your spokespeople

Getting air time and column inches for their spokespeople in these situations is proving to be hard work, our clients sometimes tell us during these media coaching sessions.  What should they do to create more coverage?  Well, here are a few reasons for their failure plus some suggestions for what to do about it.

One major problem might be that you’re simply not saying anything interesting.  It’s worth remembering that journalists and editors get more statements and comment from experts than ever before and so a bland statement of the obvious isn’t going to appeal to them at all.  Neither, on the other hand, is a strongly worded paragraph or two that merely says what everyone is else is saying.  If callers into a show are attacking the actions of a person or an organisation, then simply piling on the bandwagon of condemnation yourself won’t help you to stand out and get that media coverage.

We look at what makes a media story and what journalists are looking for during our media training sessions. It’s a great way of building the confidence of interviewees as it removes the fear of the unknown and it helps with preparation.  Essentially, it must have a new angle.  If everyone is saying one thing about a current issue then having your spokesperson say something different or unusual will help.  Backing their assertions with some good arguments, examples and figures is even better.  You don’t have to be deliberately perverse and controversial (in the media we’re suspicious of shameless polemicists) but you just have to say something that other people aren’t.

What are journalists looking for in a spokesperson

Similarly, you might agree with the general consensus but have an additional reason for saying it. If a company has made a mistake on social media, for instance, rather than just following the general flow of debate you might want to point out an additional risk, provide a surprising insight or introduce a little known fact about social media.  Journalists are always looking for a new “angle” on a story and you can help them here.

Another reason why your spokespeople aren’t getting airtime or your comments are being covered is that you’re releasing the information too late.  This problem relates to the first reason.  Very often by the time everyone within the organisation has had their say and approved the comment the news agenda has moved on.  Traditionally, sending a press release out or releasing a statement in the early afternoon would be perfectly timed for the following days’ newspapers or that evening’s TV and radio news programmes. These days with 24-hour news and constantly updated website deadlines are, in fact, a thing of the past. The news agenda moves faster than ever and so statements and comments have to be released more quickly to hit the news cycle.

Very often organisations spend so much time crafting the words and then having them approved by so many different departments and individuals, all of whom feel the need to add something that by the time the statement is finally approved events have moved on and this has become old news.

Advice for Communications and PR teams

Our advice to Communications and PR teams is to be brave here.  Yes, we know that we’re not the ones who need to justify these actions to the CEO or explain them to the board but actually having us as independent, third party experts to back up this request can help and argue for it alongside them can help.  Comms people have to make it clear to the organisation that only a limited number of people can have approval and they must be ready to act quickly.

It’s also essential for those who do approve a comment to resist the need to add superfluous words and while toning down content. Basically, keep it short and punchy. We worked with one organisation that challenged those who had to approve a comment to actually take words out and refine it rather than adding bits. As we like to say – good writing is when you’ve taken away everything you can and not added everything you want.  Here’s another reason why your comments are not getting coverage – the language is dull, corporate and unmemorable.  Very often the language used by businesses is at odds with what the media wants.  Corporate language is often focussed on compromise, on qualifying statements and on taking a range of views into account so as not to exclude anyone or to cause offence to internal or external audiences.  Added to this, documents produced by companies frequently take their time to come to their key messages.  Whereas with the media the opposite is the case. Here it’s about making a clear, strong statement that will have some members of the audience cheering and disagreeing with varying degrees of force.

Generally, the language that you use in your statement or comment should have all the hallmarks of good writing. This includes simple language and short sentences. There is nothing wrong with jargon and technical terms but only if they are appropriate to the audience. Meaningless corporate buzzwords are hated by journalists and will massively reduce the chances of your comments being used by them.  Talking about “ecosystems” or “synergies” will simply have the media rolling their eyes and hitting the delete button before they read any further.  On the other hand, if you can find a striking phrase, an interesting simile or even a clever little pun, then journalists will be more likely to use your comment.  In our media training sessions, we explore with clients how to create these phrases and how to use them in media interviews.  The fact is that plain, simple language doesn’t have to be boring.

Here’s another reason  – there are no stories or examples.  We’re always banging on about stories in our media coaching sessions but the fact is that they’re vitally important – but very often company spokespeople forget about them. Obviously, you wouldn’t mention a client during a statement without their permission but if they’ve done something that illustrates the point you’re making then work with them to include them in a positive, helpful way.  Similarly, talking about how brilliant you are will put a journalist off because it just looks like pointless boasting (or advertising, as we also call it).  However, use a bit of humility, explain the challenge that you faced and how you overcame it and what you’ve learned and this will be much more appealing.

We do a lot of media training for lawyers and other professional services firms and we know that although journalists are always looking for examples these firms have to respect client confidentiality.  Therefore, we suggest that they use one of three approaches.  First, they either use a client anonymously (changing the facts slightly will help to protect the client’s true identity).  Second, they create a hypothetical example – after all, “Just imagine…” or “For instance…” are phrases that we all use in everyday life because they work to communicate an idea, so why not use them in your business communications?  Third, you can also refer to other examples and case studies, already reported in the media, of companies that aren’t clients and have nothing to do with you.

If you do put out a statement that is timely, newsworthy and punchy not only will you find that print journalists are copying and pasting it into their pieces but TV and radio producers will also be asking your spokespeople to appear on their programmes to expand on it.  During our media training courses, we’ll work with participants to develop their key messages and to understand how they can make them newsworthy. This goes for statements and comments to the media and the contributions of spokespeople.

Constructing a good statement takes a bit of effort and energy but it can pay dividends in terms of raising your profile, establishing your expertise and differentiating yourself from the competition – if you get it right.